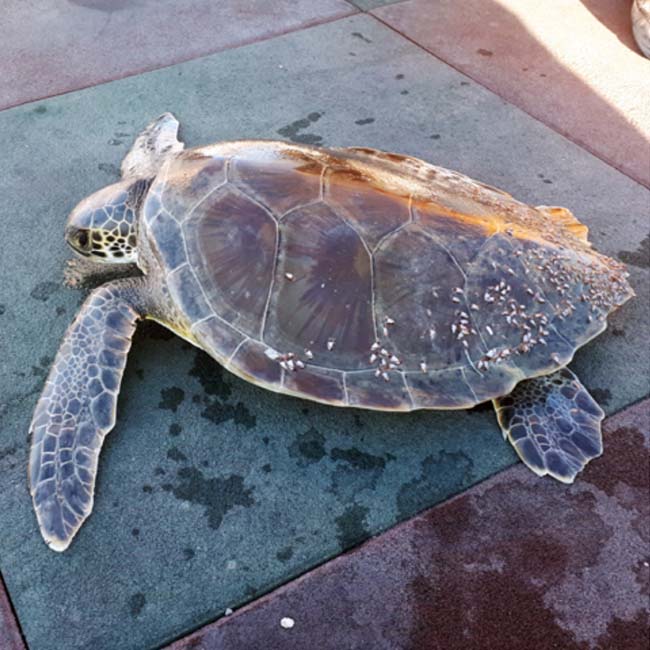 One of the Caretta Caretta turtles, who love the open seas, returned from the dead today. The "marina adventure" of the baby turtle weighing approximately 2 kilos, still in motion at the Delta Marina in Girne was spotted by the delivery to the Tashkent Wildlife Rehabilitation Center.

HOW SAMPLE OPERATION HAS STARTED?
The young turtle, apparently escaping from an attack and shoveling into the Delta Marina, was first noticed by Marina's Füsun Şen.

Füsun Şen who saw that the baby tortoise was still standing beside a pier leg; as follows: "I waited for a while to flee, but he stood still. I did not move from the earth to avoid it, but it did not change. When I bend over and look at myself, touching with the hand and not touching him, he worried me that he might be dead. I asked for help from my other friends in our marina."

PALLET CARETTA 'HORRIBLE' IS REMOVED
The tortoise that the helper's staff can not act on is taken to the pier with a net-scoop and everyone gets a deep breath when it is clear that they are alive. However, there is no need to move on the animal. The anterior-to-fins, which have moved a few times, have also remained motionless. Only the head moves together. The wound does not look like a wound.

Phone traffic is starting now. Fusun You are the first to search the Environment Department. A veterinary call and "Trauma is passing, either attacked or passed very close to the boat of the boats." Animal lovers look for animal protection associations, and they say, "Keep on in the water and get there immediately .

WISHING WAITING HAPPINESS Şen continues to tell; "We did not come in. We continued to keep the animal in the water with more than 2 hours of squeezing in. We were attacked by the sea, but when the stillness continued, we started to wait for a savior again. We came to Takkent Wildlife Rehabilitation Center with two friends and handed them over to them, and we will call them tomorrow and learn about the situation of our Caretta Caretta."